Nineteen years ago a small group of Romanian-American immigrants were dreaming to have their own place to pray in their Romanian-Orthodox tradition.

The church history began with an article written for SOLIA by Jack Boian where Archbishop Valerian was informed that there were a group of Romanian Orthodox families in Phoenix metropolitan area.

In March 1982 Fr. R. Grabowski was sent to phoenix to look into the opinion of opening a mission church. There was an American-Romanian Club and Mr. Percy Avram – president of the club – provided a list of 58 families with 138 souls to the Episcopate as a good base for starting a mission church. Fr. Costică Maftei was delegated to come to Poenix and in October 1982, after two meetings, first mission was created. In March 6th 1983 at a general meeting with Fr. G. Zmed as the representative from the Episcopate the mission became a parish under the name of “St. John the Baptist Romanian Orthodox Church” and Fr. Costică Maftei was officially appointed to serve as parish priest. Among the founder families that are sill members of our church today are: John Breja fam., Silviu Rohan fam., Percy Avram fam., John Nan fam., Vasile Romega Thompson fam., Todor Rasa fam., Gheorghe (Bebe) Barac fam., Olivia Turc and John Nicoară fam. Then there are a number of families and people founders that we don’t know where they are: Ioan Craiovean, Ioan Tabuc, Mihai Georgescu, Constantin Florea, Elaine Georgescu, Dan Horvath, Toma Eremie, Constantin Campan, Mitru Geijan and a number of church founders that are not anymore with us – may God rest their souls in peace – Jack Boian – first president, Emil Dumitrache, George Ştefaniu, Maria Bohar, Nicolae Poleac and George Candea.

On March 25th 1983 the parish was registered with the State of Arizona and in April 11th 1983 the Romanian Orthodox Episcopate of America sent the Episcopate charter authorizing the parish to function as a legitimate parish. A place at 1507 West Hatcher Rd. in Phoenix was rented for 3 months as a place of worship than they moved at 5221 W. Motebello Ave suite #6 where a portion of a warehouse was arranged to serve both for worshiping and for parish social functions.

(A note from Gabriel Maftei: …One thing that I want to bring to your attention, is the church was also located in a building rented from Saguaro School. The address is 12835 N. 33rd Ave. Phoenix, AZ 85029. I can’t remember exactly the years we were there, but I know it was during the early to mid 80s and prior to us moving to the Montebello address.)

After 1983 a lot of other people were active with Romanian community and they are still members today. I will mention a few families: Peter Pascu, George Ardelean, Pitus Puican, Dumitru Pascu, Cornel Barbes, Mike Balos, George Zivan, Ken McNaughton and Lia Puicon.

In 1986 Fr. Costică Maftei was released from duties and in 1987 Fr. Aurel Todorescu was appointed. In 1988 the actual land at 3749 W. Behrend Dr. was purchased. Mrs. Veca HeiuŞ Tuttle, her husband Dr. Jacqueline Tuttle, together with Fr. Todorescu and parishioners participated for the blessing of the ground where the church hall was built. The church hall was built under the architecture design and supervision of Benjamin BarbeŞ assisted by Ken McNaughton.

In 1990 Fr. Aurel Todorescu was replaced by Fr. Ion Preoteasa then between 1991 to 1997 Fr. Vasile Pârâu followed by Fr. Filimon Barbos were serving as parish priests. 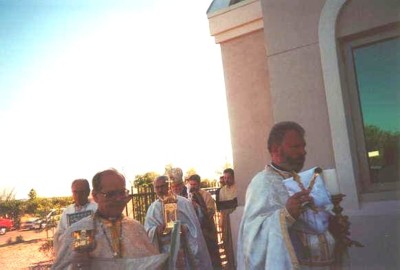 In 1997 Fr. Gheorghe Libotean was appointed as parish priest by his Eminence Archbishop Nathaniel.

Fr. Gheorghe Libotean, working very hard, was able to keep a good balance between different groups of people with different opinions, promoting the respect for each other and the community membership grew very fast up to the point of being able to borrow money and build a beautiful church.

In his leadership Fr. Gheorghe Libotean is assisted by Fr. Virgil Suciu in charge with church youth and director of Sunday School, and Fr. Filimon Barbos in charge with senior citizens.

Mr. Benjamin Barbes was the architect who drafted the plans and supervised the new church construction. The interior painting of icons has been carried out by Ion Ardelean and his assistant Codruţa Vasian.

The new church as a building is beautiful inside and outside, built in our Romanian Orthodox tradition and style, but now is coming the most important thing: TO BUILD THE SPIRITUAL CHURCH INSIDE OF US AND AMONG OURSELVES, to improve our spiritual life by attending the church services, by bringing our children to church, to teach them the basic Christian principles of love and forgiveness, to have faith and walk with God.

May God bless America and our Phoenix Romanian-American community, to live in peace and harmony and to protect us from any evil and catastrophic tragedies.

Compiled by Fr. Virgil Suciu
Source of information:
Mr. Percy Avram booklet – Church History.
Verbal info. From some founders of our church.
Some of the church records.